Usually if there is a performance bottleneck, that time we are interested to do a performance trace and analyze which part of the program take more time and try to improve that. As this is just a introduction to AMDP Trace from ADT with ABAP console , we just begin with a very basic native sql within AMDP procedure, just to know how to do a AMDP trace from ADT/hana studio ABAP Console.

Below is a class with an AMDP procedure with a simple select and then we have the ADT abap console method IF_OO_ADT_CLASSRUN~MAIN.

From RUN AS.. we can choose ABAP Application (Console)

The output displayed in the console.

Now its time to enable, the AMDP Trace. Just right click on the editor and choose as high lighted below-

The below screen appears.

One you select Finish, the Execution happened and we can see the ABAP Console with output.

Now time is to check the AMDP Trace. From the Access Command  ( as highlighted) search for    ABAP Trace.

The popup screen appears once you select the Access Command Icon. I already searched for ABAP Traces and it appears  in my previous choices but for first time it may not show.

Just type- ABAP Traces in the search area and Select.

Now  the ABAp Traces is opened. Double Click on it to open the details-

Now here the link page to the details of the trace with few statistical information. Select any link/tab as highlighted  to see further details of AMDP trace. 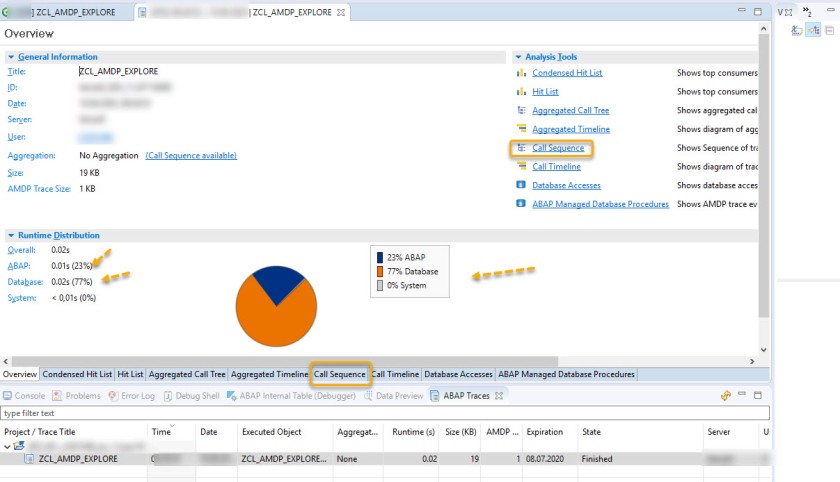 It gives a more deeper view of the time taken by the database procedure during execution and fetch.

Hope this help at least how to take a trace of AMDP Procedure with ADT/HANA Studio ABAP Console.

This site is maintained by Manish Shankar and Siva Prasad . This site sapcodes.com is not affiliated with SAP SE.